I hear it clearly. For years now the sound of silence has become a trusted friend. My head clears when I near its fringe. Any hinge unlatched becomes attached in this peace. A place where space is abundant, and a writer can be inspired, synapses fired and reloaded, goaded into action. The attraction is most wanted, a welcomed invitation to find the inspiration I seek. As others begin to stray, here I will stay. Surrounded by the sound of silence. This trusted friend. My words never end in this place and I find my peace in my solitude. 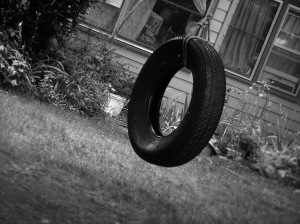 Out in front
there’s a rickety porch,
rough hewn timbers with tree bark
still clinging to their fibrous skeletons.
Rocking chairs and a stump table;
shavings from a whittled branch
strewn about the weathered floor boards.

Out in front
there’s a tree; tall and stately,
a monument to the longevity apparent
since it was planted, a feeble sapling
much like himself – thin, gangly and weak.
It speaks of perseverance and dedication –
fulfilling its station to mark time and grow.

Out in front
near the tree, there’s a lake…
a pond, really. Reeds and lily pads
defining its edge. Sounds of crickets and croaks
of bullfrogs, cicada whines reverberate in the late
afternoon. Soon their sounds will be silenced
as the seasonal change lumbers into the valley.

Out in front
is a tire dangling, a rope looped over a branch
of the stately tree. Dirt dug out, a furrow where feet
dragging and kicking kept sticking the ground
with a new found ferocity. Gaining in height and velocity,
the children take turns launching, airborne to land
in a heap with a thud; sometimes blood appears, the poor dears.

Out in front
a wagon waits; flatbed secured, a hitch holding tightly.
On a brightly hued morning, and without much in the way
of a warning, grandfather had passed. The town folk amassed
in respect; paying forward what had come around on occasion.
Sadly in procession, he was carried from the house – a finality.
Placed upon the caisson, a solemn silence ensued.

Out in front
the porch remained; rockers swaying in the stiffness of a late breeze.
Birds nested in the tree and the pond continued with activity
and the sounds of life. No one sat on the pendulous tire as it
swung hypnotic. The front door was ajar, but it was in exit,
not as an invitation to enter. Out in back the fields had grown
unruly and left to sit fallow. But, out in front a good fellow has gone.

I notice Bill no longer visits.
His bench sits in solitude.
Frank shuffles alone.
His “partner in crime” has met his time.
A daily trek beckons to unhearing ears.
“Hey Frank, how are you doing?”
“Haven’t seen Bill in a while.”
Frank sadly smiles and shakes his head.
“Well, you take care of yourself!”
Frank waves and shuffles along as
the winds blow loose leaves
where no one’s toes have trod.
The gulls screech a cacophony,
no conductor for their raucous symphony.
And me? I usually watch for signs,
but this empty bench reminds me.
Bill will visit no longer.

My Work So Far

Follow THROUGH THE EYES OF A POET'S HEART on WordPress.com

LOVE TO WRITE
THROUGH THE EYES OF A POET'S HEART

My heart envisions what my eyes refuse to see. ~Poet Walter J Wojtanik

"Fill your paper with the breathings of your heart." William Wordsworth

Scribblings and scrawls of a hopeless romantic soul

From my muse to your eyes.