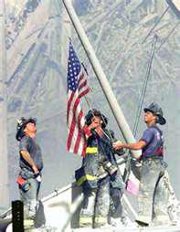 A principle was attacked amidst
tears and destruction; a surreal snapshot
of a day worth forgetting. But no one did.
How do you forget the sight; the sound?
How do you forget the faces; the screams?
How do you diminish the sacrifice?
The word ‘impossible’ was tailor made
for this moment in time. Despair and
disbelief would be usurped by anger
and determination to not allow those who
put it all on the line, go quietly into that good night.
It became a fight to rise each day to face
the insurmountable task one brick at a time.
As many bricks as there were tears shed.
As many shards of glass as there were screams
of torment and terror. But the greatest error
made by a faceless ideology was assuming
we were broken and defeated. But the foresight
of three brothers of the fraternity most depleted
showed we were not defeated. Through the rubble
it stood in defiance. A naked flagpole planted
among the girders and debris. A symbol; our banner
raised high. A declaration loud and clear.
We are still here. We will not go gently.
Together we stand, a shield for liberty.
You took your shot and failed. An American Tale…
and the flag was still there! America had been blessed.

“I’m sorry, Mrs. Wojtanik”.
Words of comfort meant to heal,
only to steal the lasting memories
that now will never come.

“I’m so sorry”. Words to stab at
the heart and rendered her broken.
Twice in four years, toxemia her venom;
a powerful poison to suck her soul

from within. A boy. Another Handsome boy.
He was to be named Walter Joseph,
a tribute to her husband’s father, Walter,
and her own immigrant patriarch, Jozef.

Her first born; her first stillborn,
Joseph Walter’s life ended before it began
as well. A living hell for young parents
of promise and love; she almost went with him.

But after two successful live births,
another would-be child held hope,
but no one could have imagined the private
pain would reoccur. It was two days shy of her

own birthday. She felt the emptiness.
She felt the loss. And she felt more.
In nine months of anticipation, she had a sense;
an immense feeling of wonder this boy

provided. Potential and promise.
Her heart ached so. Words could not describe it.
Words were taken from her. Or maybe,
she had given her words for her son to use.

A chance to express what she could not say;
he would have shared with the world. An orator?
No, a composer. A poet. Yes. She had a sense.
He would have given his heart in metered rhyme.

His life would have been a living poem.
A poem of love for the mother that bore him,
and the father that could have taught him the beauty
of the art in which he could have excelled.

Now, people will never know, or grow in the
warmth of his heartfelt hearth of words.
They could never miss what they never had,
but she always will. “I’m sorry, Mrs. Wojtanik”

(Poetic Asides prompt for Day 3 of the Poem-a-Day Challenge: Envision a life without you in it.)

Your regimen is in control
you’re taking off the pounds,
the image in your mirror
is quite a bit less round,
You watch your calories and carbs
you drink a lot of water,
your eyes get wide when you decide
to do something you shouldn’t oughta.

You can’t resist that peanut stick,
the Boston cremes look good.
Can’t you see your belly filled with jelly,
do you really think you should?
Your stomach churns for crullers,
the lemon custards ooze,
you can’t decide (but you gotta hide)
whichever one you choose.

You peek around the corners
to see whose eyes are spying,
Your mind is racing, just which one
will be the one you’re trying.
You lift the lid to claim your prize
you’re dying just to try it,
then comes the phrase that you despise,
“What about your diet?”

Then you walk away dejected,
your salivation’s ceased,
Your craving for that plain old glazed,
is just about deceased.
So you grumble munching carrot sticks
when still you want to try ’em,
and you cry and moan ’til the cows come home,
“Just why the hell’d you buy ’em?”

Since you are on Weight Watchers,
counting points and such,
Never cozy up to a dozen donuts
the pressure’s just too much.

“A moment on the lips,
a lifetime on the…” OH SHUT UP!

My Work So Far

Follow THROUGH THE EYES OF A POET'S HEART on WordPress.com

LOVE TO WRITE
THROUGH THE EYES OF A POET'S HEART

My heart envisions what my eyes refuse to see. ~Poet Walter J Wojtanik

"Fill your paper with the breathings of your heart." William Wordsworth

Scribblings and scrawls of a hopeless romantic soul

From my muse to your eyes.